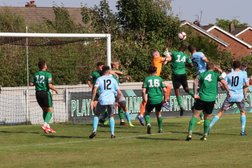 All square at Townfield

Cables start the new season with a goalless draw in sweltering heat at 1874 Northwich.

to come away from home, keep a clean sheet and the performance the lads have put in shows how far we have come
Kev Lynch

Ahead of the game all the talk was about the weather and water breaks for Saturday's matches across the country were making national headlines. With the game played at just over 32°C throughout the afternoon both sides struggled in the heat on a dry pitch and the game played out to a goalless draw with the only winner being the bottled water companies.

In a drab opening period the home side were happy to let Cables play their pressing game, looking for bits and pieces on the counter but the only moment of note in the first half were Kyle Sambor's missed header from a brilliant Adam Hammill cross. A caution for Cables' James Foley was arguably the biggest talking point of the half as nobody in the ground has any idea what it was for.

Northwich started the second-half strongly, raising the tempo beyond anything they had reached previously. With Cables easing up on the press to conserve energy the home side took advantage, taking the game to the visitors and were only denied a deserved lead by two fine saves from Mitch Allen.

The water break gave Kev Lynch and the lads a chance to regroup and freshen up the side with a couple of substitutions. Cables sprung into life. James Foley, MOTM for many, hit the bar. Luke Pritchard fired agonisingly wide. When James Hammill was put through by John Murphy everyone in the ground thought the three points were heading back up the road only for the keeper to make a brilliant low save.

The referee brought the game to a close and give us an unlikely highlight of the day of nobody being in a rush to go inside.

When asked after the match if it was two points lost Kev Lynch said "on reflection of the game I'd say yes...to come away from home, keep a clean sheet and the performance the lads have put in shows how far we have come...on another day they take the chances and walk away with three points." Kev also revealed how his pressing strategy was adapted to the conditions which also explains how the lads were able to finish strongly. "I said to the lads they had to pick their moments when to press in this heat and they managed the game really well" before adding "we're playing really well at the moment and there is still a lot more to come."

Harry Cannon-Noren explained what it was like on the pitch for the lads. "You get here and it's mid 30s, it's tough straight away and you know the tempo is not going to be very high. In the 1st half you can see the pitch is dry and the passes were holding up a bit." The full-back was shifted inside to cover at centre-half and he was asked about his thoughts on the switch and he revealed it came as no surprise when he told us "a few weeks ago when we played Wigan I knew I would be asked to play [there] and I said I'll give it a go and I did alright."

"Wherever the team needs me, that's where I'll play and I'll always give a 110% for the Cables."